LendingClub operates as a marketplace platform with generally no credit risk on its balance sheet; OnDeck retains a significant portion of loans on balance sheet.

We contrast below a pure marketplace lending model vs. a pure balance sheet model to highlight differences on revenue and funding: 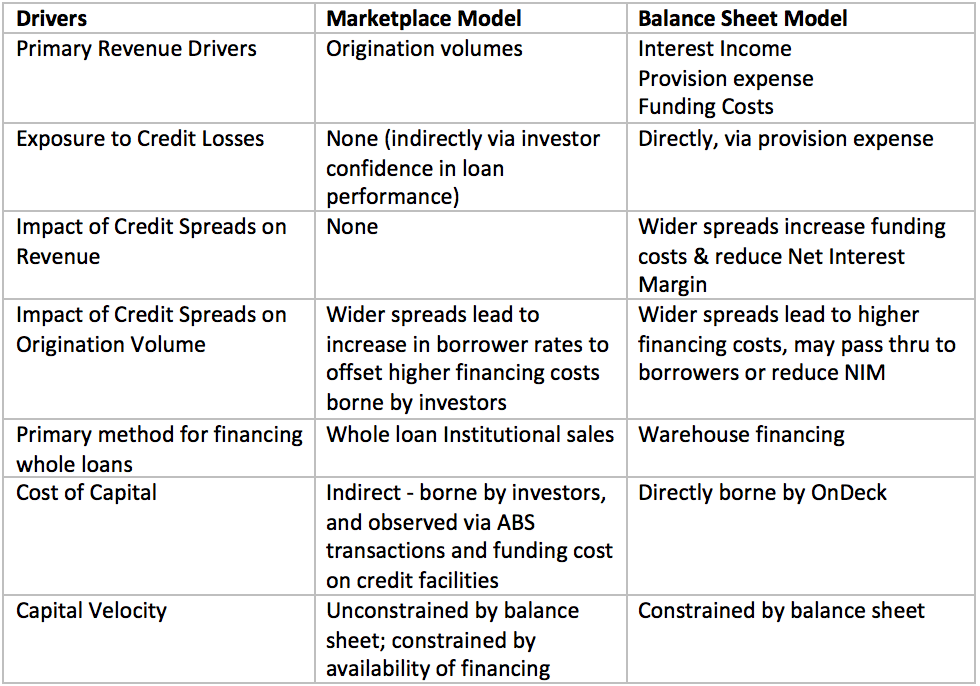 Impact of Funding Mix on Originations

The marketplace lending business model has the potential for high capital velocity. Capital velocity runs in both directions. Accordingly, the key themes in the Lending Club earnings call are “resiliency of capital”, “committed capital”, and the “responsiveness” of the LendingClub operation to market conditions. The primary drivers of capital access are investor confidence and investor perceptions of relative value.

The slowest segment to re-engage are banks. Banks are less concerned with incentives as they are with loan-level due diligence and robust internal controls. For instance, banks seek to ensure a clean series of contracts, representations, and documentation undergird each layer of the funding chain connecting borrowers to investors.

OnDeck
OnDeck increased originations to $590 MM of loans in Q2, an increase of 3.5% on a linked quarter basis, and 47% year-over-year. OnDeck also increased the portion of loans financed by their balance sheet from $602 MM to $730 MM in Q1 and increased total funded debt to $554 MM. OnDeck’s funding cost increased 150 bps to 6.7% vs. the prior year period.

Impact of Credit Performance on Revenue

LendingClub
Since LendingClub does not generally deploy its own balance-sheet to buy loans, interest rate increases and increased provisions do not drive earnings volatility. Instead, LendingClub must efficiently price in credit risk premia at loan level such that loss-adjusted returns remain attractive to institutional whole loan investors.

The primary driver of the quarter’s $81 MM net loss is a reduction in origination volumes and a non-cash goodwill impairment of $35.4 MM.

OnDeck
Q2 losses of $18 MM are mostly attributed to the increase in loss provisions and lower gain-on-sale revenue. Performance was in line with expectations and the provision rate remained within the target of 5.5% – 6.5% range.

OnDeck’s credit performance is strong, and net loss rates for Q2 originations are in line with other vintages. The 15 days+ delinquency rate decreased year-over-year.

The worse than expected collateral performance of securitizations that led to triggers breaches in MPLT 2015-OD1 and MPLT 2015-OD3 are specific to these two deals and isolated from overall OnDeck loan population.

PeerIQ will speak at: