Amazon continued its foray into the lending sector this week by offering a small business credit card, building on its success financing merchants with over $3 Bn in lending, Bloomberg reports. Amazon’s actions indicate broader ambitions to own the consumer’s financial relationship via lending, non-bank mortgage origination, credit cards, a co-branded deposit account, and potentially a robo advisor. Amazon is partnering with banks where they lack a clear regulatory swim lane.

In the “Case for Bank M&A” analysis last month, and our analysis of Big Tech banking ambitions last week, PeerIQ made the case that banks with an unsecured lending technology capability stand to benefit. JPM and GS continue to strike deals with big tech platforms marrying their low-cost deposit base and risk management capability with the captive, data-rich lending channels of Big Tech firms. Last week, PeerIQ CEO Ram Ahluwalia spoke with Bloomberg’s Lisa Abramowicz and Pimm Fox about Amazon’s recent moves. Listen in for the latest.

In macro news, US retail sales disappointed in February shrinking 0.3% MoM, significantly below estimates of a 0.3% rise. Consumer spending has fueled economic growth and investors are focused on whether weak retail sales will derail growth. US consumer confidence jumped to a 14-year high, which suggests the recent dip in retail sales is a dot and not a pattern. Markets are pricing in a 100% probability of a Fed rate hike next week on the back of strong unemployment and inflation readings over the last couple of months.

On the regulatory front, the OCC is opening dialog on third-party risk management guidance with FinTechs, in an effort to ease the burden of bank-fintech partnerships.

The US Treasury will release a report on fintech regulation which will include a review of the regulations governing mortgage originators and servicers, marketplace lenders, payment processors and other FinTech companies. The report would make recommendations on rationalizing regulation between federal and state bodies and determining the boundary where fintech organizations cross over into banking. Square and others have been vying for a banking license and regulatory clarity will hopefully define clear swim-lanes for fintech companies to compete with traditional banks. In fintech financing news, Funding Circle, the biggest online lender in the UK, is planning an IPO later this year.

In securitization news, 2 deals priced recently SoFi and Lending Club, and Prosper announced another deal on the PMIT shelf. SOFI 2018-B, a $869 Mn student loan securitization priced marginally wider at the top than did SOFI 2018-A, with the A tranches pricing 5 bps wider at 30 and 60 bps respectively. The B piece priced 5 bps tighter at 100 bps for the first time. Investors are getting more comfortable with the collateral and seeking out riskier B pieces causing a flattening in the credit curve. The deal was rated AAA by S&P and DBRS on the A tranches.

LendingClub’s 3rd self-sponsored Near-Prime deal priced 13, 35 and 70 bps tighter respectively on the A, B and C tranches than its previous deal. KBRA rated the A tranche A-. More importantly, we do not see any evidence that the recent volatility in equity and credit markets has limited ABS investor appetite. This week, we analyze the CLUB 2018-NP1 deal in further detail below.

Below, we look at the collateral, bond and pricing levels for LC’s latest near-prime deal and related comps.

This is the largest near-prime deal that has been issued so far. The deal has 8,237 loans more than the CLUB 2017-NP2 deal and the average loan balance is $422 lower. The weighted average FICO on LC’s near-prime deals is 639, lower than that on AVNT 2017-B.

KBRA’s loss estimates on LC deals has dropped by ~30bps since the 2017-NP1 deal for substantially similar collateral. This has resulted in ~30 bps lower credit enhancement on the latest 2018-NP1 deal, even with a slightly lower excess spread. Overall, we can see that AVNT’s better collateral characteristics allow it significantly lower CE on similarly rated tranches. 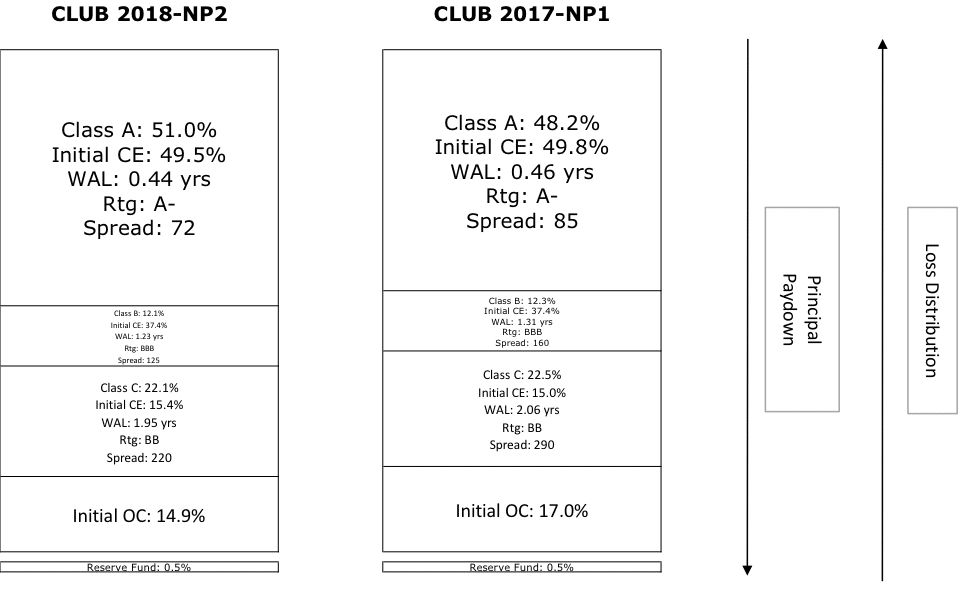 CLUB 2018-NP1 priced at the tightest spreads so far. A combination of investor comfort with the performance of near-prime collateral, coupled by a rise in interest rates has compressed spreads on LC’s latest deal. Rating agencies have also reduced expected loss rates for substantially similar near-prime collateral in subsequent deals.

You can analyze the performance of Near-Prime collateral on PeerIQ’s platform. The chart below shows the cumulative loss (%) for LC near-prime loans originated in the first quarters of 2014, 2015, 2016 and 2017. The chart shows how newer vintages are experiencing somewhat higher losses than older vintages, although ABS investors remain protected thru robust structural protections. Reach out to learn more! 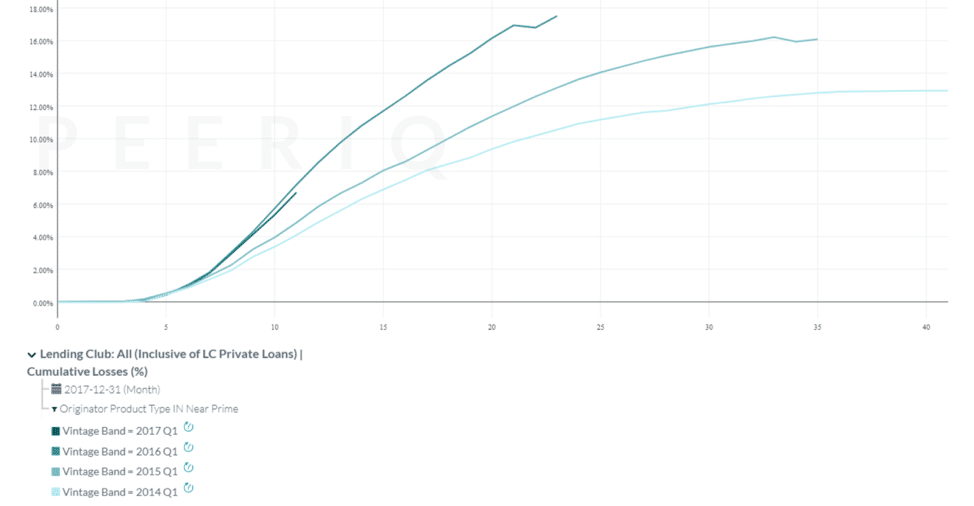