As 2020 Comes to a Close, the SEC Greenlights New Direct Listing Model and Acima Nets a Sale

As we’re heading into the last few days of 2020, a couple of notable developments on a holiday-shortened week: e-commerce continues to shine, with $172Bn of holiday spending, a bright spot amid a cooling economy; the SEC gave the NYSE the green light for a new model of direct listings that have the potential to transform the IPO process; and lease-to-own platform, Acima, delivers a $1.65Bn holiday to its shareholders.

This week’s unemployment filings recovered somewhat, coming in at 803k – a marked improvement from the prior week’s 892k new jobless claims, but still elevated from November’s COVID-era lows. 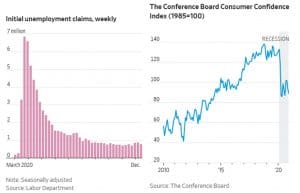 Alongside a month-on-month decline in new home sales, weakened consumer confidence readings, and a fall in overall household spending, this week’s macroeconomic data shows an economy that is coming off the boil – just as the ice starts to pile up outside.

…While E-Commerce Continues to Shine Brightly

Online sales continued to be the silver lining for retailers this holiday season, with overall online sales up 49% YoY, according to Mastercard, clocking in e-commerce at nearly 20% of sales volume this season. That boost lifted traditional categories suffering from COVID lockdowns, with e-commerce increases standing in sharp contrast to overall spending drops:

Overall, online spending was nearly $172Bn for the holiday season, a 32.4% increase from last year, according to Adobe.

On the Washington front, hopes for Christmas Eve stimulus were dashed this week, as a hard-fought COVID relief package stalled out after President Trump demanded significantly larger direct payments than his party agreed upon. As this newsletter went to press, prospects for the 5,600-page legislation – including $600 checks to individuals, new business relief, a reopened PPP program and more – were far from clear.

This new round of relief is a sorely-needed bridge through the winter months, and a down payment on economic recovery in 2021. Washington, it’s time to get this done!

Big news from the SEC on an otherwise quiet week, as the regulator greenlights a new form of direct listing offered by NYSE. Under the new structure, companies would be able to raise capital during a direct listing – something previously limited to IPOs – while maintaining the liquidity advantage of the direct approach. The new structure could also potentially help limit the massive day-one shifts in company share prices that have most recently been seen with ABNB, DASH, and UPST IPOs.

Last week, we spoke about UPST’s recent IPO success and raised a few ideas on why their business model was so highly valued by the market, zoning in on balance sheet exposure to loan performance.

After publication, we caught up with our friends at LC, who rightly pointed out that our analysis only looked at the loan assets held by the company – consolidated across VIEs under GAAP – without fully accounting for investor’s claims on those VIEs. 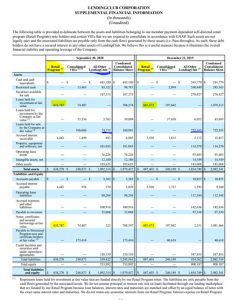 In fact, once that offset is fully accounted for, LC’s direct exposure is only $74.7MM, a significant drop from the more than $720MM held on the balance sheet at YE 2019.

We refer back to last week’s newsletter on the valuation disparity between LendingClub and Upstart. We believe this is a mix of positioning but also of substance. Topic for another deep dive – reach out and let us know what you think.

This week, Rent-A-Center announced that it would acquire Utah-based, Acima Credit, a lease-to-own platform serving more than 15,000 merchants, for $1.65Bn in cash and stock (~7.3x adjusted EBITDA). Founded in 2013, Acima, led by CEO, Rob Christiansen, focuses on credit solutions for big-ticket items such as appliances, furniture, and other goods, and has seen invoice growth of more than 70% annually over the last five years. 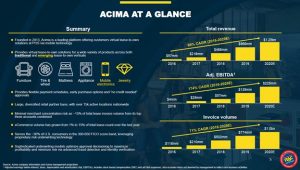 The transaction is expected to close in the 1st half of 2021, subject to customary approvals, and is expected to be immediately accretive to RAC’s EPS. Congratulations to Rob and the Acima team on the sale!

Israeli payments company, Payoneer, led by CEO, Scott Galit, is considering a SPAC listing with aims to go public sometime in the next six months, according to Calcalist. This would be the company’s third exploration of public markets, after aborted attempts in 2015 and 2019, and could potentially value the firm at $2.5Bn to $3Bn.