In Markets, Upstart Starts Strong at $3Bn+; In the Real World, Unemployment Up and Spending Down. What’s Next?

Lots to cover this week, including a slowdown in U.S. economic recovery as unemployment claims approach 900k and spending falls by 1.1%; clarity from the FDIC on ILCs and brokered deposits.

It was also another standout IPO week, with Upstart more than doubling from its debut to hit a $3.3Bn valuation.

We draw observations that explain why the market is valuing Upstart ($3Bn market cap) more than its crosstown rival LendingClub ($660 MM) and similarities to nCino ($7.5Bn marketcap).

On the macro front, a slew of data released this week continues to underline the fits-and-starts nature of economic recovery here in the U.S. A couple key releases we were watching this week:

Unemployment filings rose for the second week in a row to 885k, underscoring the winter slowdown and as the spike in Q4 retail sales moves into the rearview mirror.

Retail spending dipped in November, a sequential fall of 1.1% after October’s 0.1% tick downwards, with consumer’s unwilling to spend lavishly during the uncertain holiday season.

FDIC Further Opens the Door for FinTechs to Partner, Compete with Banks

On the positive side of the ledger, this week the FDIC finalized two high-impact rulings covering brokered deposit regulations and the issuance of lending charters to non-bank entities. By a vote of 3-1, the commission brought needed clarity to how deposit brokers are defined, ensuring that banks will be able to smoothly work with FinTechs to source deposits. In the same ruling, the FDIC laid out concrete steps for future ILC applicants, clearing the way for future non-banks to follow Square in seeking the right to lend and take deposits.

Upstart Off to a Great Start

Big news this week for Upstart, led by, Dave Girouard, which saw its shares rocket after Wednesday’s IPO. Originally priced at $20, at time of writing the shares were trading north of $45/sh, giving the firm a market cap of nearly $3.3Bn. 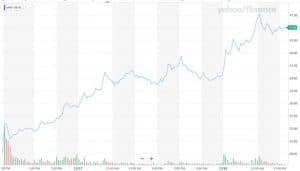 Speaking to MarketWatch after the IPO, Girouard emphasized that those involved in the lending industry have been searching for “a fountain of youth that can change the game in terms of accuracy,” arguing that artificial intelligence and cloud computing can lead to a “transformation across the banking and financial services industries for decades to come.”

So how does that compare to competitors already in the market?

Right away, you can see that Upstart is significantly a “flow” based business, retaining a far smaller share of loans than its competitor, LendingClub (and even that level of retention is down 76% versus YE 2018). As we’ve discussed, that allows Upstart to focus on volume-based fees for income, which drive more than 95% of revenues earned. As a result, Upstart almost looks like a payments business with loads of fee income, except for the fact that…well, it is lending.

Where do those loans go? As Upstart noted in its S1, 76% were funded by institutional investors and 22% retained by originating banks (primarily, Cross River at 72% and a 2nd firm at 19%), with the share held by banks increasing over time.

We would note that the above figures imply that Cross River was responsible for at least 54% of Upstart’s loan volume placement. Cross River is clear a major distribution platform for Upstart.

So why is LendingClub’s marketcap $663MM (including a ton of cash) and Upstart’s $3Bn?

Upstart benefits from volumes while retaining very little of the remaining credit risk (and capital) versus LendingClub. This as a double-edged sword as origination-to-distribute models can come under pressure when capital markets shut down.

Our thesis – Upstart is valued because of its positioning as an AI enabled lending-as-a-service infrastructure provider to banks.

The most important strategic decision Upstart made several years ago was to provide services to the bank sector. That decision is now paying off in a big way.

Dollars to donuts, we would bet that Upstart is comping as a “the nCino for consumer lending” during the investor roadshow.

Now, to be sure, Upstart and nCino are very different companies. And the maturity of nCino’s enterprise businesses is much higher (250+ banks/credit unions) as compared to less than a dozen bank customers for Upstart.

Also note that Upstart goes out its way to avoid any references to language that would make it resemble a non-bank lender. There are no references to “provision”, “vintage” or “ALL” in the S-1 for instance. Affirm, which recently delayed its IPO, has plenty of such references and is certainly studying the Upstart’s IPO debut. [ See PeerIQ’s analysis of Affirm’s S-1 here.]

By contrast, LendingClub, Prosper, and Marlette would all certainly view Upstart as a competitor (in their core consumer business) and have plenty of such references.

A competitor to Upstart would argue they are more diversified and less dependent on capital markets in substance – even if that brings the baggage of looking like a non-bank lender (albeit, tech-enabled. We also note that we cannot find any named competitors references in Upstart’s S-1 – it’s not clear this would help Upstart from a positioning perspective.

A delicious irony is that Upstart can avoid such language because they retain only a small fraction of their loans.

We would also note that Upstart’s S-1 makes it difficult to do a true side-by-side with nCino. For instance, there is no way to look at the average revenue per bank (excluding Cross River) in the reported financials.

Overall, though you have to celebrate this victory for the FinTech lending space. It’s also an incredible outcome for Founders, David Girouard and Paul Gu, who tirelessly stuck to their guns as an AI-focused lending company.

Congratulations, we’re excited for what is in store ahead!

On Thursday, cryptocurrency trading platform, Coinbase, led by CEO, Brian Armstrong, announced that it had confidentially filed for its IPO. The eight year old trading platform has nearly 35MM users – more than traditional brokerage, Charles Schwab – and is at the cutting edge of bringing cryptocurrencies into the mainstream.

Coming the same week as Bitcoin’s record-setting pricing – at time of writing, $22,760 per CoinDesk – the debut could bring a significant payout to the firm’s backers, with the company last valued at nearly $8Bn in 2018.

Readers in the Northeast will know that winter is officially upon us, with the first big storm of the season sweeping through New York this past week. That snow hasn’t cooled the competition in BaaS; just in the past few days, banking services platform, Unit, led by CEO, Itai Damti, announced $18.6MM in funding as it emerges from stealth mode.

Unit’s approach, embedding financial services underneath the consumer-facing platforms of other tech companies, emphasizes the importance of reaching consumers in new ways. And that’s further underscored by data released this week showing the continued rapid decline of physical bank branches, which are likely never to return.

Congratulations to Itai and team on the launch!

Jumping on the BNPL Bandwagon

Finally, a nod to two more entrants in the BNPL competition this week, as UK-based Zilch, led by CEO, Philip Belamant, announced a $30MM fundraise and Australian BNPL platform OpenPay announced the launch of its U.S. platform, led by industry veteran, Brian Shniderman, who joins from Deloitte’s Payments practice.

These moves come just days after Affirm, led by Max Levchin, decided to delay its IPO and wait for markets to “calm down” in January. Wishing the best of luck to Max and team – it takes chutzpah to walk away from capital markets when demand is this high, and we hope he’s made the right decision to wait.