Wishing a very happy Lunar New Year to our readers.

This week, we look at the rising importance of crypto – Bitcoin-Ethereum now exceeds the top 5 US banks by combined market cap.

Also, is the market starting to come back to earth for fintechs? Affirm’s stock trading tumbled after strong results; Loan Depot drops its IPO price.

Not yet, perhaps, with Klarna’s rumored $30 Bn private valuation and MoneyLion’s SPAC announcement.

Early Signs of Improvement; GDP Expected to Increase Under Stimulus

Unemployment claims have dropped to 793,000, which is much lower than the 900,000 peak in early January. An improving job market, coupled with President Biden’s $1.9 Tn stimulus plan, could bring out the strongest economic growth since 1984.

BTC – ETH Bigger Than the Top 5 US Banks Combined 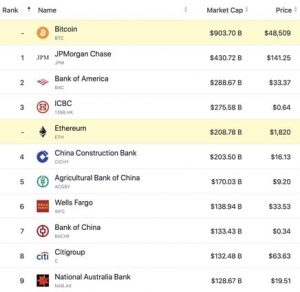 BTC-ETH is now bigger than:

a) the top five US banks combined

c) the top 10 banks of the rest of the world combined; and,

d) all public companies except for Microsoft, Apple, Google, Amazon, and Saudi Aramco

PayPal also revealed that the company is looking into smart contracts and the tokenization of other non-crypto assets.

Mastercard Jumps onto the Crypto Bandwagon

Mastercard has announced that it is planning to support digital assets in its network this year. Mastercard is addressing the crypto trend by providing additional choice to consumers who are using cards to purchase crypto assets and using crypto cards to convert their digital assets into traditional currencies for spending.

The company specifically stated that it will only support cryptocurrencies that offer significant consumer protections and compliance protocols on its network.

Is the Market Starting to Cool Off for FinTechs?

The trading down of Affirm (on their earnings) and the pricing down of LoanDepot may indicate a cooling market. SoFi SPAC (IPOE) is also trading ~7% off its highs.

Affirm posted its first quarter results as a publicly listed company on Thursday; its sales and earnings beat analysts’ estimates, but revenue and volume is forecasted to slowdown in the next quarter. The stock tumbled ~9% post the release.

We had covered LoanDepot’s upcoming IPO last week. This week, the company priced its IPO significantly lower from $21 per share to $14 per share. Possible investor concerns include: current low-interest rate environment and potential declining mortgage market / rising interest rate expectations due to the size of expected COVID stimulus package.

Klarna, led by CEO Sebastian Siemiatowski, is allegedly closing a $500 MM funding round. The rumored funding could bring the buy now, pay later company’s valuation anywhere between $25 – $35 Bn. If the rumors are true, Klarna would be the second European fintech to have tripled its valuation next to Cross River’s payment processing partner, Checkout.com.

With the speculated funding round, Klarna would have raised $1.3 Bn in the past year alone.

MoneyLion, led by CEO Dee Choubey, will make its public debut via SPAC by merging with Fusion Acquisition Corp. The post-transaction enterprise value for the merger is estimated at $2.4 Bn with an estimated equity value of $2.9 Bn. The challenger bank will receive a contribution of up to $526 MM in cash proceeds from the transaction.

Proceeds will consist of up to $350 MM of cash held in Fusion Acquisition Corp’s trust account and another $250 MM from private investments led by BlackRock and Apollo Global Management, Inc. at $10.00 per share.

OppFi to Make its Public Debut Via SPAC

OppFi, led by CEO Jared Kaplan, has announced that it will go public via SPAC. The AI-enabled fintech platform will be merging with FG New America Acquisition, which is led by former TD Ameritrade CEO Joe Moglia. The transaction is expected to close by the end of Q2 2021 and the merged company will trade on the NYSE under the ticker symbol “OPFI”.

OppFi enables banks to offer optimized financial products to their consumers. According to the press release, OppFi has originated over 1.5 MM loans, totaling $2.3 Bn since inception.