This week, we look at the (1) US’ record-setting second quarter GDP,  (2) hardship program performance at the public and FinTech lenders we track; and (3) the closing of an era, as pioneer OnDeck is acquired by Enova, (4) ‘contactless’ product innovation during Covid.

This week, official 2Q quarter GDP numbers came out, and it wasn’t pretty: a nearly 33% annualized drop, the worst since record-keeping began in the 1950s and on par with Great Depression-levels of collapse.

On the job front, unemployment applications rose again this week. Unemployment apps ticked up to 1.43mn confirming that the four months of steady jobs recovery is stalling out.

A survey published this week by Yelp drives home the follow-on impact to businesses. Over 40% of the businesses that have closed their doors since March 1 have done so permanently.

A first wave shutting down in March and a second wave, unable to keep going through the crisis, throwing in the towel in May and June.

After weeks of internal negotiations, but at minimum it looks like the $600/wk unemployment boost will fall by the wayside. (the NYT has an excellent comparison of Senate Democraft vs. Republican Plans)

The run-off of PPP benefits and loss in federal stimulus benefits coincides with the worst economic drop since the Great Depression.

Earnings in The Time of COVID

We’ve been paying close attention to earnings announcements over the past few weeks, watching for any color on how hardship programs and cures are playing out.

We’ve put together a quick summary of how they’ve been doing.

There are several gems if you stare into the table above.

Here are some big-picture highlights:

Will this pattern continue as the unemployment payment boost fades? Next episode in this drama will have to wait until 3Q, unfortunately.

However, we can look at real-time loan performance on the PeerIQ platform for additional color.

As earnings have come in, the immediate next question has been, “so what does that mean for unsecured FinTech lending?”

We’ve digested the data from hundreds of thousands of loans, representing billions of dollars in balances, and can share at least a few insights on the subject. 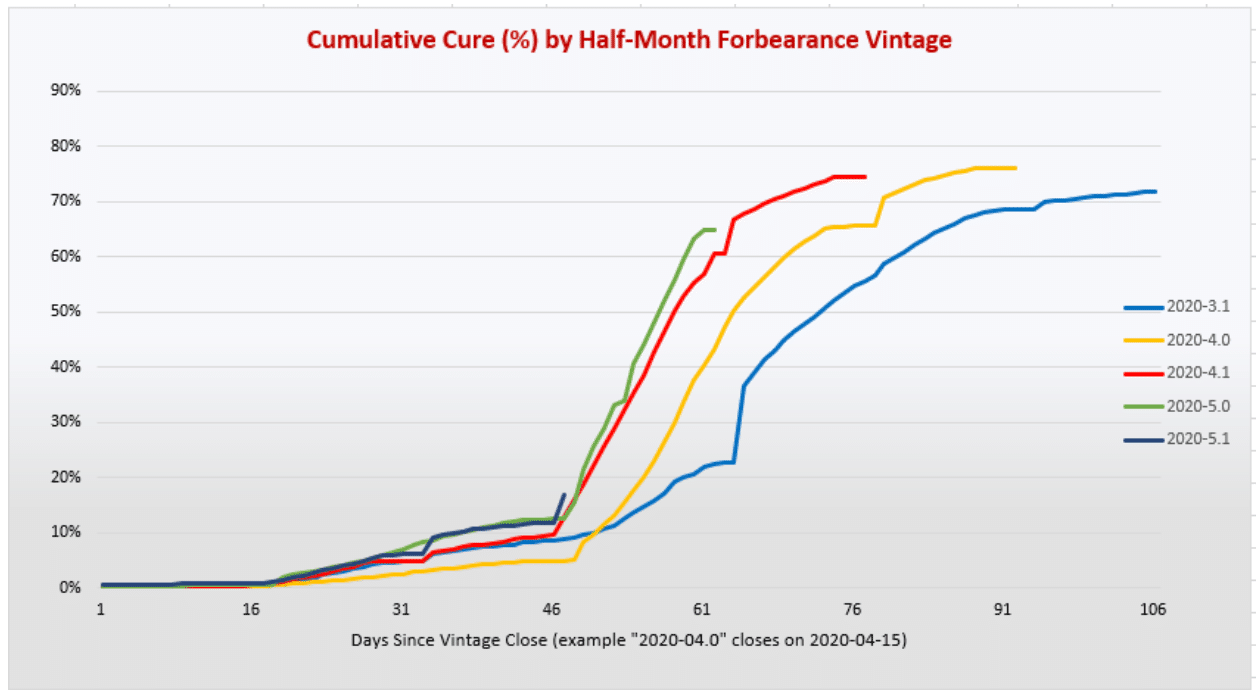 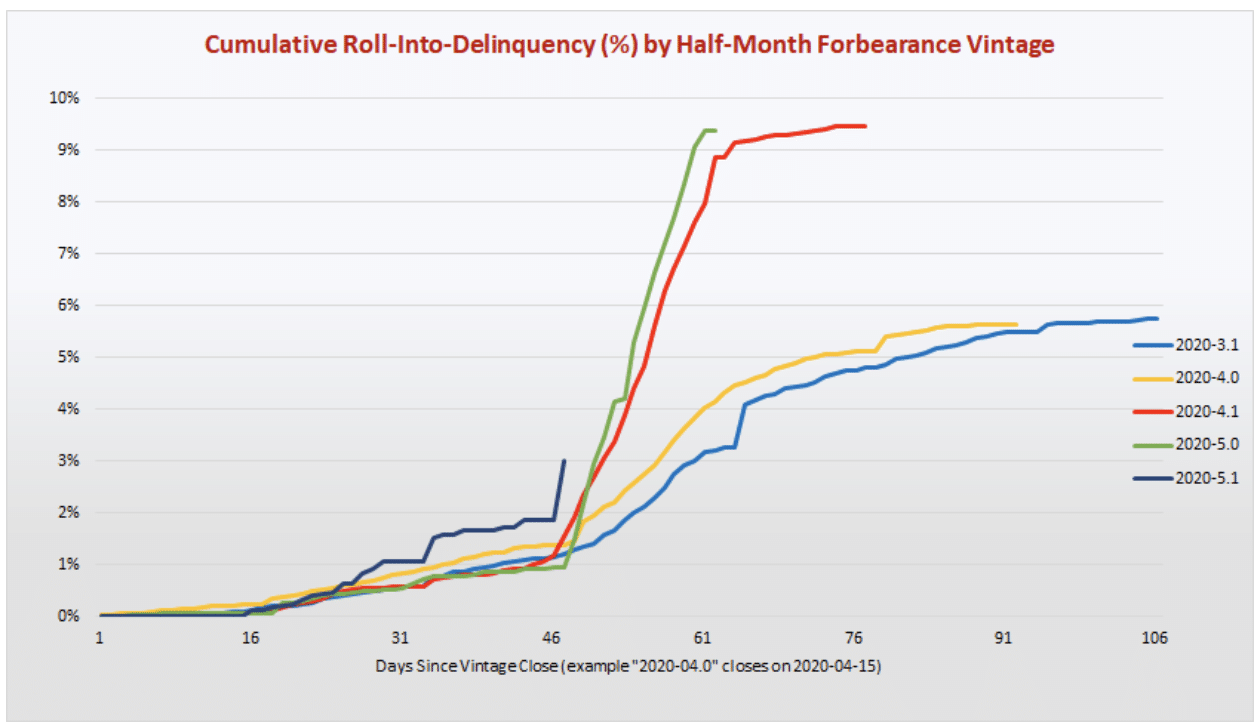 Here are some takeaways:

As time passes, we continue to monitor these cohorts carefully; watch this space for further stratifications between earlier and later borrower cohorts that will shed some light on the radically different outcomes across the groups.

Readers, we recommend doing the same: looking carefully at your own portfolio of loans and testing against the above findings. Reach out to your PeerIQ coverage to learn more about it.

We can see vintage timing effects and strong separation in results across the various rounds of forbearance. The detailed loan-level analysis that will help you understand why.

What’s the outlook? We think Discover (one of the closest public comparables to report so far) has it about right:

While the overall portfolio performance has been stable through the second quarter, we do expect to see some deterioration in consumer credit in coming quarters… [We expect] charge-offs to elevate in 2021, perhaps peaking in the later part of 2021 … then starting to tail off in 2022.

This week, JPM announced that it would be partnering with Marqeta to accelerate the launch of digital-only cards for its commercial customers.

Marqeta already uses the technology today to power DoorDash and Instacart. The same technology will let JPM service customers who don’t have access to offices where corporate cards would typically arrive.

Even the big banks are recognizing that it’s better to partner with specialized FinTech expertise, rather than try and recreate the wheel in-house.

End of an Era at OnDeck

This week marked the closing of an era, as pioneer OnDeck agreed to sell itself to Enova at a total valuation of $90mn.

We noted in our blog post comment on ONDK earnings that “Overall, this is close to the worst-case scenario for any lender management team to navigate.”

Although a 90%+ premium to where OnDeck had been trading lately, it’s a significant come-down for a firm that just a few years ago raised $200mn in a $1.3bn IPO.

What is the Breakeven Analysis on Acquiring OnDeck?

Leaving aside ONDK’s tech for a moment, what do you have to believe for the deal at this price to make sense?

Let’s dig into the numbers:

That portfolio will have a higher yield due to the burning out of bad credits. Let’s stay conserative and assume it is 30%, or $152mn per year.

Add in the extra provisioning to the purchase price ($90mn pricetag plus $186mn under provisioning), and you get an all-in cost of $276mn for a portfolio spitting off $152mn p.a.

Sure, there’s a risk more loans slide into ONDK’s DQs, but for a less-than-two-year payback period, certainly seems a risk worth considering. Also, there is some value to the tech and a shot for Enova to grow a new line of business. 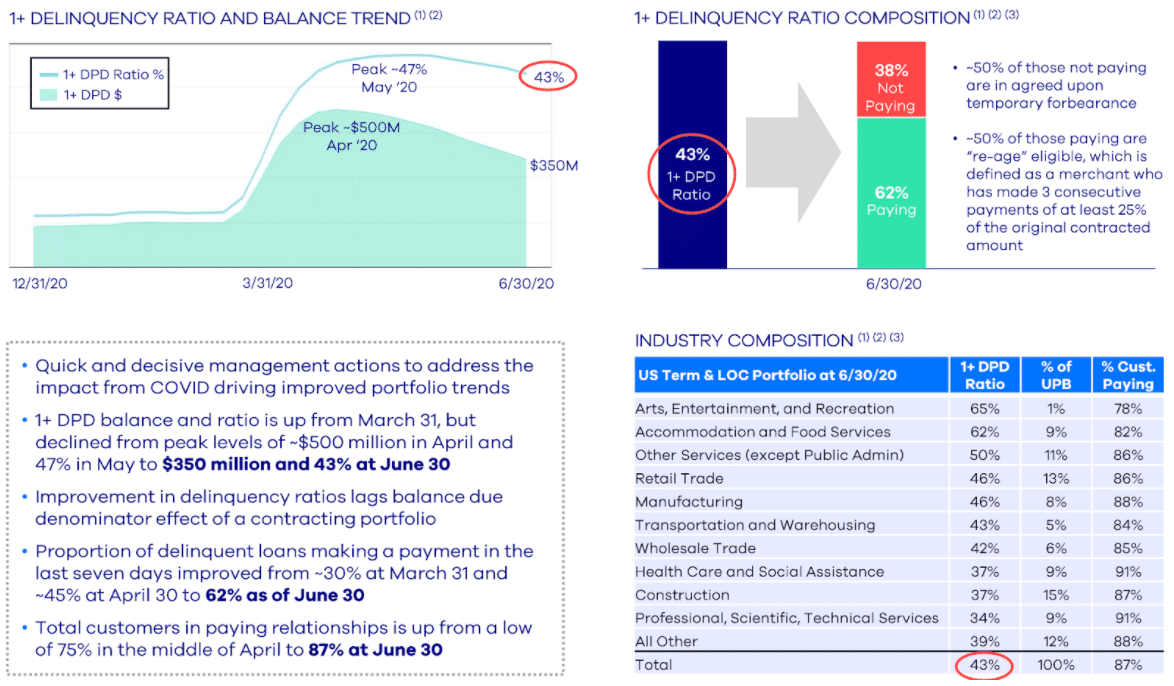 Enova, you’re getting a world-class team in Noah and his leadership team; good luck to all involved!

A couple new product and financing announcements to highlight this week:

Alchemy, led by CEO Tim Li, announced the launch of a line of credit infrastructure product for its clients. The white-label product allows bank customers to apply online and have funds pushed to their debit card without ever having to set foot in a branch.

Money-transfer firm Remitly, led by Matthew Oppenheimer, raised $85mn from existing backers at a $1.5bn valuation. Oppenheimer, Remitly’s co-founder and CEO, said in an interview this week that customer growth has increased by 200% compared to a year ago, with 300 million customers served in aggregate spread evenly across the 17 send-from markets and the 57 send-to countries where Remitly operates.

Affirm, led by PayPal alumnus Max Levchin, has reportedly begun outreach to bankers in preparation for an IPO. Sources told the WSJ that Affirm, a leader in the “buy now, pay later” space, could be valued at up to $10bn.

We’d see this as the first major test of how capital markets will treat a balance-sheet consumptive FinTech lender.

Affirm has had an unblemished financing history so far. Llet’s see how this plays out (and who knows, maybe they get snapped up by a big bank or payments network before the IPO ever comes to term).

As we’ve said before, every crisis brings opportunity, and the firms that were focused on digital-first offerings before the pandemic are best placed to succeed in this next normal.

And investors agree: S&P released an analysis showing FinTech funding in 2020 will likely top the 2019 highs. Like the saying goes, have product-market-fit, will fundraise.

Whence Came Stonehenge’s Stones? Now We Know (NY Times, 7/29/2020) A new study identified the source of all of