This week, we look at the steady job market recovery, with job openings back to pre-COVID levels; Pfizer’s big COVID vaccine breakthrough (the first among many); the last set of earnings, from GSKY, ELVT, and RKT; and industry financing news, as Better.com hits a $4Bn valuation while other FinTechs line up for future IPOs.

Once again, we saw a slow-but-steady improvement in the U.S. labor market this week, with new unemployment claims falling to 709k, a nearly 50k drop from the week prior.

Not only are unemployment claims down, but new job openings are up. With nearly 11MM job openings posted online this month, it’s only 2% below the February figure. 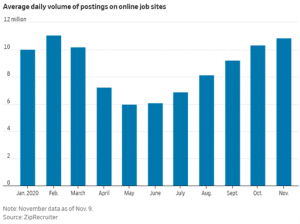 Yes, there’s a lot of ground left to cover – as the WSJ notes, the unemployment rate and the 11MM people out of work are both 2x pre-COVID levels – but each week the encouraging signs continue to build.

Light at the End of the Tunnel

Big news this week from pharmaceutical giant, Pfizer, which announced positive preliminary results from its COVID vaccine candidate. Initial analysis shows a 90% effective rate, far higher than many scientists had hoped – and a huge step towards resuming “normal” life in the coming months.

The news helped drive U.S. markets higher on the week, with the S&P 500 reaching a new record of 3585.15 by the close of trading on Friday.

Banks Holding Back on Lending

One of the things we – and you, certainly have been watching throughout the COVID crisis is the rapid increase in cash deposits held at the big banks, and more importantly, how the banks are putting those deposits to work.

Or rather, not putting them to work.

As Forbes highlights this week, the largest American banks have seen an inflow of $1.3Tn in deposits since February of this year, but a staggering share (35%) of those bank assets are sitting in treasuries rather than being put to work. That’s widening the divide between the banks and FinTechs, with our industry stepping up to cover lending to consumers and small businesses.

So what does the data actually say?

We looked at the consumer lending sector specifically, pulling data from the Fed on the overall level of consumer credit, and the picture is clear: 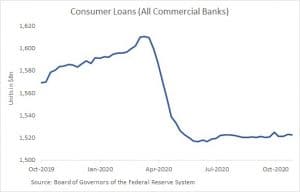 Source: Board of Governors of the Federal Reserve System, PeerIQ

Looking at consumer loans, you see a similar pattern to what Forbes highlights for the commercial sector: the volume of bank loans to consumers fell by nearly $100Bn at the beginning of the summer, and has yet to really recover. 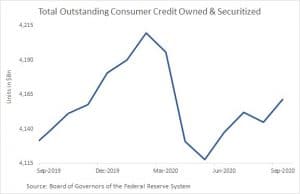 Source: Board of Governors of the Federal Reserve System, PeerIQ

Contrast that to the consumer loan market overall, which has made up nearly half of the drop since this spring; that’s the non-bank lenders stepping up, even as banks have pulled back.

We know that many of our readers are the ones filling this essential gap for consumers. Thank you!

As our regular readers know, each week we’ve been keeping an eye on the performance of borrowers that took advantage of COVID forbearance programs. It’s become increasingly clear that there’s a divide between borrowers that took up forbearance offers early in the pandemic (April to June) versus those who entered later (July to September). 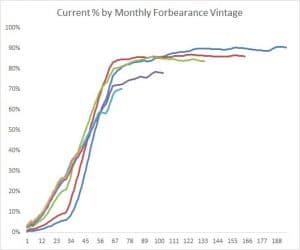 Borrowers from the April to June cohorts have effectively recovered, with the share of balances that are current approaching 90%. The later cohorts (July and afterwards) continue to struggle, though, with the current share hitting ~70% after 60 days and only slowly increasing afterwards. 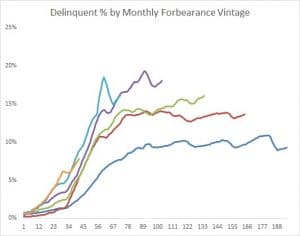 Those struggles are similarly reflected in the delinquent ratios, which – although noiser – continue to climb above 15% for borrowers that entered forbearance programs after July.

Are you seeing the same patterns in your own portfolios? Contact your PeerIQ client service representative to learn more about this, and other analyses, you can conduct via our platform.

We’ve spoken a number of times about the importance of coordination across Federal and State regulators when it comes to FinTech, highlighting the confusion that can occur when groups aren’t aligned.

Add the Cleveland Fed’s president, Loretta Mester, to the list of regulators calling for better coordination and oversight.

In a speech this week to the Philly Fed’s FinTech confab, Mester highlighted the potential benefits that digital financial services can bring, but also warned that “a rethinking of the regulatory framework is needed….” She called for regulation by activity, not by legal entity (e.g., enforcing payments regulation consistently across banks and tech firms); modernization of antitrust laws, to spur digital innovation; and deeper engagement by regulators to upgrade their expertise in technology.

While the exact approach of the incoming Biden administration is still to be seen, at the very least it’s clear that more attention will be paid to FinTechs in the coming years.

Closing Out this Earnings Cycle

This week, we saw the last set of earnings for this cycle, with GreenSky, Elevate, and Rocket all releasing earnings at the start of the week.

Although GreenSky [GSKY] reported a YoY drop in gross transaction volume to $1.5Bn, improvements in transaction fees (+40bps to 7.3%) and a record $9.5Bn servicing portfolio helped drive adjusted EBITDA up 17% vs 2019, to $39MM.

Importantly, credit quality has continued to improve – with FICO scores at all time highs, and 30+ delinquency rates significantly improved. 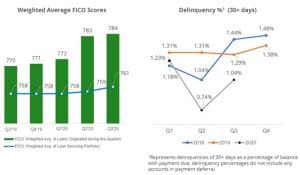 With all this as the backdrop, the GSKY team successfully completed $875MM of various funding initiatives, including the successful sale of $775MM in loan participations. Congrats!

Elevate [ELVT] announced an earnings improvement for the quarter, with adjusted earnings climbing to $17.4MM versus $2.6MM in 3Q 2019 even as revenues fell by 43% to $94MM. 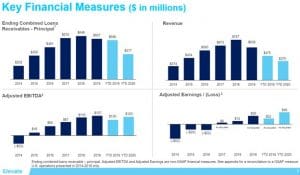 What drove the profitability bump? Loss provisions were only $13MM (14% of revenues), versus $92MM (56% of revenues) last year, which, CEO Jason Harvison, credited to their newly overhauled underwriting model. This ratio is one to watch.

Last but not least, Rocket Companies [RKT] announced record origination volume in 3Q, more than doubling to $89Bn (with a gain on sale margin above 4.5%) and helping drive net income up 500%+ to $3Bn.

They’ve managed to do this without compromising on credit quality: as of October 31st, 4.1% of portfolio was on a COVID-related forbearance program, comparing favorably to the industry’s 5.8% rate.

The pandemic has underscored the importance of bringing digital-first lending tools to bear on behalf of customers, and Rocket has managed to be both part of the establishment while staying on the cutting edge of technology for years. Congratulations to the team on a fantastic quarter.

Turning from public to private markets, this week Better.com – led by friend of the company, and CEO, Vishal Garg, clinched a $200MM Series D fundraise, launching the firm into the stratosphere with a valuation pegged at $4Bn. The fundraise comes as COVID has helped double the monthly volume (from $1.2Bn to $2.5Bn) processed by the firm, and is on the heels of IPOs by industry stalwarts – most notably Rocket itself earlier this year.

The pipeline of FinTech IPOs continues to build, says Forbes, with billing platform AvidXchange and international payments firm Flywire kicking off the planning process. Both firms have a bit more experience than some recent newsmakers – Avid was launched in 2000, while Flywire was founded in 2009 – yet have managed to consistently deliver steady growth above 40% per year.

Like other IPO-bound travelers, the big question will be, to SPAC or not to SPAC? The structure brings advantages of speed and price certainty, but is far from a perfect solution; we’ll be watching closely to see which route these firms choose to fly.