This week, we look at growing consumer confidence and a potentially record year for mortgage lending, even as unemployment filings tick back up.

We also examine some of the regulatory priorities for an incoming Biden administration; and the “Next Top SPAC” competition continues, with payments platform Paysafe inking a $9Bn deal and industry stalwart, SoFi, reportedly meeting its own SPAC suitors.

With winter now upon us and COVID cases rising, there was a notable increase in unemployment filings this week to 853k – a 137k jump from the week prior, though experts warned that the holidays can make the metric volatile.

Importantly, consumers are feeling more confident in the state of the economy as things rebound. New data from the University of Michigan shows a rebound in sentiment through December, driven in part by growing confidence in the economic recovery. 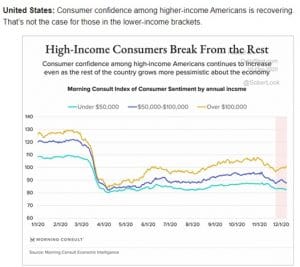 With confidence growing and rates at record lows, consumers are cutting back on their credit cards and instead, are pouring money into new homes. Data released this week by Inside Mortgage Finance shows $2.8Tn of new mortgage lending in the first 9mos of 2020, on pace to break the record columns pre-financial crisis. 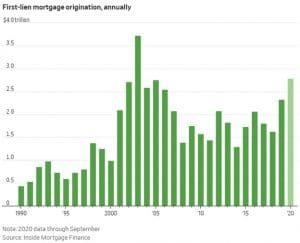 Unsurprisingly, it’s the nonbank lenders like Quicken Mortgage that are driving that growth – approaching a nearly 60% share of originations in this potentially record year.

As the year winds down, focus is increasingly turning to the policy priorities that the incoming Biden administration may bring. With former Fed Chair, Janet Yellen, mooted for Treasury, we’re still waiting to see how other key financial services roles are allocated, but even without knowing the names, some priorities are clear.

Thanks to all the panelists for the insights!

Paysafe, the payments platform jointly backed by PE giants Blackstone and CVC, announced that it would go public in a $9Bn deal with a SPAC led by veteran investor, Bill Foley. The deal marks a return to public markets for Paysafe, which went private in a 2017 $4.7Bn purchase, and locks in a nearly 3x return for the PE pair.

SoFi Considers Its Own SPAC Debut

FinTech leader SoFi, led by CEO, Anthony Noto, is reportedly in talks to explore going public via a SPAC, reported CNBC this week. The company, which was valued at $4.8Bn in a fundraising round last year, has sought to downplay expectations of an IPO, emphasizing that while a public debut is “in the company’s long-term plans,” it’s not an immediate priority.

Check out our write-up of Affirm’s S-1 here. Our crack team of analysts went under the hood and it’s worth a look.

Capital One Changes the Payment Priority for Consumer Loans

Capital One announced this week that it was prohibiting customers from using its credit cards to pay buy-now-pay-later debts, declaring the transactions as an “unacceptable risk.” The move puts the credit card issuer, 3rd largest in the U.S. with more than 62MM accounts, on the opposite side of the growing industry – and other leading FIs such as PayPal, which are rolling out their own installment payment options.

This is a notable development. The company policy pushes installment loans to the bottom of the payment priority. Historically, the priority of what liabilities consumers pay off was a customer decision – driven by rate, convenience, service and other factors. This constraints that decision substantially. Expect other large credit card issuers (many of whom do not have a personal loan offering) and view FinTechs as competitive to follow suit.

Swedish open banking platform, Tink – backed by PayPal and major European banks BNP Paribas and ABN AMRO, among others – crossed the $800MM valuation mark with a new fundraising round, CNBC learned this week. The firm, which now generates EUR 30MM ARR, expects to use the money to further fuel its hiring, which has already reached 365 people (up from 150 last year).

And finally, congratulations to Gilles and the team at Cross River, who this week were named Company of the Year by Banking Dive. The group highlighted Cross River’s successes this year, most notably in the PPP program – where the Fort Lee, NJ firm financed $6.5Bn across nearly 200,000 loans, the third largest (by loan count) in the country behind only BoA and JPM.

Congratulations to the group – a well-deserved honor!