Lots to cover this week as we look at the moderate growth in the US GDP, SoFi’s SPAC performance, Upgrade’s new rewards checking account, Coinbase’s plans to go public via direct listing and highlights from this week’s earnings.

Moderate Growth in US GDP, Unemployment Continues to Fall

In macro news, the US GDP expanded at an annualized rate of 4%.

This moderate growth in GDP reflects conservative consumer spending after the boost it had in Q3. Consumer spending, the number one driver of the economy, increased at a mere 2.5%.

Unemployment claims dropped by 67,000 in the week ended January 22nd to 847,000, but are still at four times over pre-COVID levels.

The fintech lender is also innovating by incentivizing customers to change their primary bank account via a 20% reduction on Upgrade interest rates.

In addition, Upgrade’s new checking account provides zero account fees and reimbursements of ATM fees on up to five withdrawals a month.

Over the past two years, Upgrade has moved from being a pure consumer lender to a neo-bank.

Back in 2019, the company launched the Upgrade card, which is a hybrid between a personal loan and credit card.

The mania in equity markets continues with SoFi’s SPAC performance. Although the deal has not closed, the SPAC (ticker: IPOE), led by Chamath Palihapitiya, is up 2x+.

What does that mean for the implied value of SoFi?

Generally SPACs trade at par value (or slightly above in anticipation of a deal). Par value is $10/share.

The SPAC is reverse merging and valuing SoFi at $8.65Bn.

However, public markets have bid IPOE to $25/share. This implies that public markets are valuing SoFi at ~$21Bn – over 2.5x the deal value! After the deal closes, the SPAC is expected to further increase in value.

The trading craze in stocks like GameStop have led to a surge in interest in the RobinHood app with over 3MM downloads in January.

More and more investors are borrowing against their investment portfolios to enter into riskier positions such as concentrated positions, options, and leveraged ETFs.

In the past, margin debt peaks have generally indicated the marginal buyer is tapped out and might be approaching a market top. 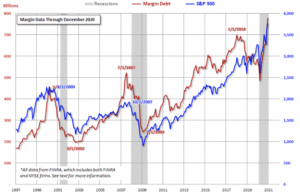 Visa CEO Al Kelly’s comments on cryptocurrencies, “Our strategy is to work with wallets and exchanges to enable users to purchase these currencies using their Visa credentials, or to cash out onto a Visa credential to make a Fiat purchase at any of the 70 million merchants where Visa is accepted globally.”

Our take? Visa sees crypto payments as an alternative network and in our view, an existential threat to the interchange model that card issuers rely on.

We think that the primary reason for this recent divergence between debit vs credit is that stimulus payments directly hit the bank account, and debit cards are an easy way to access those funds. The broader theme is that millennials and Gen-Z prefer debit cards to credit cards to keep their debt in check.

Other notable highlights from earnings presentations this week:

Synchrony Financial – Loan growth was down 6% YoY. SYF reported $82Bn for the quarter compared to $87Bn in Q4 2019. Why? Underwriting tightening or market share? 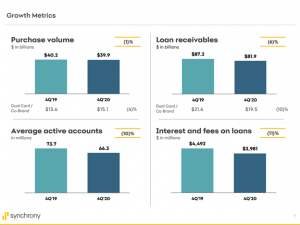 American Express – Loan growth was down 17% YoY. Delinquencies were down 52.3% YoY, while balances in financial relief programs were up 77% YoY.

Capital One – Consumer banking loans were up 10% YoY and deposits were up 17%, in line with the trend we highlighted last week on liquidity build.

Crypto currency exchange Coinbase, has announced that it will make its market debut by way of direct listing. The San Francisco-based fintech filed its S-1 with the SEC in December. Making a public debut via direct listings would allow Coinbase to list its outstanding shares available for sale in the market. To date, Coinbase has raised over $540MM in funding.

Nubank, led by CEO David Velez, raised $400MM in Series G funding, in a round led by GIC, Whale Rock, and Invesco. Nubank’s current investors, Tencent, Dragoneer, Ribbit Capital, and Sequoia also participated in the round. The challenger bank will use the funding to further expand its operations in Mexico and Colombia.

Nubank has remarkably grown its customer base from 12MM in 2019 to 34MM today. The new funding round brings the company valuation to an astounding $25Bn, making it the fourth most valued financial institution in all of Latin America.