This week, we look at the grinding economic recovery in the U.S. and its flow-through impact to consumers, with online holiday spend up nearly 20% YoY even as overall spending dropped. We also look at Stripe’s Treasury launch, as their partnership with Goldman and Citi is poised to upend the BaaS landscape. We highlight continued fundraising success across the banking and payment world, with Amount and Affirm inking key deals.

As we head into winter here in the U.S., the latest labor market data underscores the long grind ahead for the economy to recover. This week, we saw new unemployment claims dropping to an adjusted 712k, while overall unemployment fell in November to 6.7%.

Where does that leave us? While the economy has recovered more than half of the jobs lost since March, there’s still a deficit of nearly 10MM; core to the sustainability of the U.S. economic recovery will be the speed at which those jobs come back. 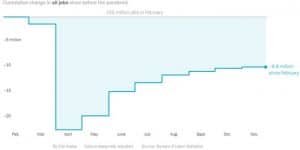 Consumers Cut Back on Holiday Shopping – but Spend it Online

With COVID as the backdrop, consumers cut back on more than just turkey: people’s average spending from Thanksgiving through Cyber Monday was $312, down 14% from last year. And Black Friday crowds were nowhere to be seen, with in-store shoppers falling a whopping 37% YoY.

It’s not just coal for retailers, though: while in-person traffic fell, overall online spending was up significantly versus last year, with Black Friday online spend of $9Bn up more than 20% YoY, and Cyber Monday setting a new record at nearly $11Bn.

And that combination of increased online spend and closer attention to budgets is accelerating the success of many in our industry. This week, Afterpay reported that over $2Bn was spent in November through its platform, more than doubling last year’s pace.

Down in Washington, lawmakers are hoping that they can wrap up negotiations on a stimulus plan and put a bow on it before the holidays, with a bipartisan group putting their weight behind a $908Bn stimulus package this week.

The proposal would bring some holiday cheer to consumers and small businesses alike, with additional benefits kicking in to partially replace the $600/wk additional unemployment benefit that lapsed this summer, and new monies made available to businesses and governments struggling with lost revenues during the pandemic.

Big news on the industry front this week, as Stripe announced a new BaaS capability in partnership with Goldman, Citi, and others.

The new tool, dubbed “Treasury”, packages the core capabilities of account opening, payments, and cash management into an API that business-facing platforms can embed into their offerings. 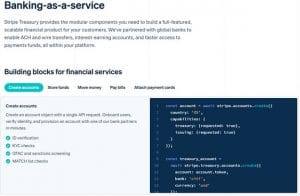 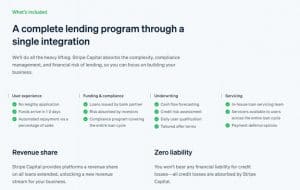 First out of the gate to use the platform is Shopify; starting in 2021, Shopify Balance accounts will be made available to the hundreds of thousands of merchants using their platform.

The Stripe product announcements adds a lot more context to Affirm’s “warrants for exclusivity” deal (~$60 MM of value). Stripe – an emerging “API first” competitor to Affirm – was in bed with Shopify on a number of BaaS offerings. The warrants deal enabled Affirm to preserve a seat at the table and lock-in economics with a fast-growth B2B2C e-tailer.

So, what does this mean for the industry?

Embedded finance is here to stay. As leading business platforms fully appreciate the value of delivering banking, lending, and other financial services to their customers, the race will only heat up to bring these capabilities to market. Here’s an excerpt from our newsletter last year (building on Matt Harris thesis) that seems as relevant today as it was then:

We read Matt Harris’ thesis as a shift in emphasis on product/customer to a focus on function. Extending on Matt’s piece, the idea is that what we call FinTech in the future is more likely to resemble a company like Stripe (a $35 Bn “dumb utility”).

Owning a core, albeit dry and boring, is arguably more worthwhile than running sexy Superbowl ads and having one million app downloads.

Standalone solutions are on notice… With this launch, Stripe continues to position itself as a one-stop-shop for building financial capabilities into product offerings. The firms that have built a business on only one of these verticals (think POS lenders and similar) will be challenged to deliver something unique and differentiating versus Stripe; that said, there’s enough growth potential that you’ll likely see more than one firm succeed.

…as are smaller banks who are cut off from this distribution channel. The large banks have been on a tear with their partnerships lately and this is just one more example of tech firms turning to established players to deliver scaled solutions. For those banks and FinTechs that rely on traditional channels, growth just got harder.

The growth potential is there for those that seize it. While the larger banks have been first out of the gate, there’s still plenty of time for other providers to catch up. And the community banks that are ahead of the curve in building digital partnerships may in fact be far better positioned to succeed than the mid-tier (still behemoth) regionals. FinTechs that are helping accelerate community banks’ digital transformation (nCino, Q2, and the like) are your friend – and for investors, this underscores the growth potential for these platforms.

As with everything else COVID, the transition to digital-first finance has accelerated to ludicrous speed – and while there’s clearly a risk of being left behind, there’s still time to get on board and be part of the shift transforming finance.

The folks at Goldman surely seem to think so: this week, bank technology platform Amount, led by CEO, Adam Hughes, announced an $81MM Series C round led by Goldman, bringing their 2020 fundraising total to $140MM. With competition heating up, banks are seeking “resources and infrastructure to accelerate their digital strategy,” noted GS. Congratulations to Adam and the team!

With an IPO on the way, Affirm’s Max Levchin is not slowing down; this week, the firm announced an expansion into our friendly neighbors up north, adding Toronto-based PayBright for a cool $264MM. Affirm emphasized that PayBright’s “first-mover advantage” opened up new markets for the firm, with their “base of merchants complement[ing] our own customer network.” The cash-and-equity deal is expected to close in the first quarter of 2021.