Also, we’re happy to share that PeerIQ has been selected for Phase III of FDIC’s Rapid Phase Prototype competition!  We are humbled and grateful for the win – and it reflects our broadening focus on the depository institution space. See the FDIC press release here for details.

Fed Chairman Jerome Powell said that “we are a long way from maximum employment,”  indicating that the central bank’s easy money policies will remain in place for the foreseeable future.

Get Ready for Self-Driving Banks

The OCC’s acting comptroller of currency Brian Brooks wrote an op-ed in FT on how the OCC plans to handle decentralized finance (DeFi).

Comptroller Brooks makes the case for DeFi – a thesis for delivering of financial services with no human intermediation:

Consumer lending fintech Affirm (ticker: AFRM) went public on the Nasdaq on Wednesday and saw their stock rocket 100% from an initial listing price of $49. Affirm’s IPO had already increased the initial pricing target of $41 to $44 due to insatiable investor demand for IPOs/SPAC.

Affirm’s shares closed the day at $97.24, and were last trading at ~$113, with a market cap of $27Bn. Affirm’s market cap is larger than all fintech lenders put together (that may change after a SoFi SPAC).

What’s the difference between Affirm and fintech lenders? As we noted in our Affirm S-1 deepdive, Affirm is playing to disintermediate traditional Visa/MC payment networks. Settling transactions via Affirm enables merchants to avoid the ~2.5% in interchange fees and poses the first real threat to incumbents since Square. (Reminder, Square took capital from Visa and operates on traditional payment rails.)

Nevertheless, the mania for IPOs and SPACs – especially amongst retail mo-mo driven investors in the age of RobinHood is palpable. (See, for instance, the record volume of call options traded by retail investors.)

Matt Levine has a hypothesis around the recent trend of “IPO pops” for those looking to dig in more. 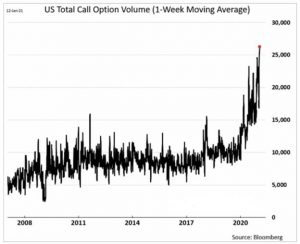 Earnings Season Kicks off with JPM, C and WFC

JPMorgan Chase & Co. posted a record quarterly profit while Citigroup Inc. and Wells Fargo both posted higher-than-expected earnings in the final three months of the year, boosted by the reserve releases and Wall Street’s record-setting run.

JPM also reported an eye-popping ROE of 24%. JPM also noted a $2.9Bn reserve release, which reflected the impact of vaccines and fiscal stimulus plans. (See our note on the banking sector reserves here.) We pointed that a good chunk of reserve builds from the mega-banks would be released – main surprise is just how quickly that has come.

The divergence between Main Street and Wall Street operations continues. Revenues fell at all three banks’ consumer divisions, even as the investment banking divisions posted strong results, and equity underwriting fees at both JPM and Citi jumped by over 80% driven by the recent SPAC frenzy.

Visa and Plaid Break Up, Another SPAC in the Offing?

Visa Inc. and Plaid announced that the companies have terminated their merger agreement and agreed with the DOJ to dismiss the litigation related to the proposed transaction. However, it could be a blessing in disguise for Plaid.

The proposed deal was first announced on January 13, 2020. Since then, Plaid’s prospects have soared, as the pandemic accelerated adoption of digital banking – Plaid’s customer base grew 60% in 2020. Plus the DOJ lawsuit raised Plaid’s profile considerably, mentioning in a press release “Plaid, a successful fintech firm, is developing a payments platform that would challenge Visa’s monopoly.”

Speculation is already swirling that Plaid may go the SoFi route and seek a SPAC.

Walmart Gets on the FinTech Bandwagon

Walmart will team up with Ribbit Capital, the investment firm behind Robinhood, to create a fintech start-up. The retail giant interacts with millions of customers and its substantial brick-and-mortar presence could help win over the unbanked and underbanked, a demographic that has historically had trouble trusting financial institutions, including online-only fintechs.

Walmart is likely targeting the mass-market and the under-banked population. This could pressure fintechs and neo-banks focused on the same sector (Dave, MoneyLion, Avant, etc.).

Note however that Walmart has not historically had a great track record on ambitious tech projects. The $4Bn Walmart Jets.com acquisition was shut down earlier this year. The retail giant has almost 3x the revenue of Amazon, but has not been able to translate that to e-commerce dominance.

Checkout.com, led by CEO Guillaume Pousaz, raised $450MM in a Series C round valuing the firm at $15Bn. The round was led by Tiger Global Management.

Checkout.com wants to build a one-stop shop for all things related to payments, such as accepting transactions, processing them, and detecting fraud.

Checkout.com is an infrastructure partner that focuses on large merchants differentiating on the ability to customize. No doubt Checkout.com has benefitted from Stripe’s valuations and Affirm’s IPO, all of whom are attacking similar or adjacent opportunities.