We are often asked by investors whether credit card receivables are a proxy for installment loan performance. This week, we dig into credit performance of credit card securitizations representing over $100 Bn+ in consumer credit ABS deals. We include the following issuers in our analysis: American Express, Bank of America, Discover, Capital One, JP Morgan Chase, and Citi.

The credit card ABS market has historically been the benchmark sector in consumer ABS due to its liquidity, transparency, and strong performance including through the Great Recession.

The Credit Card ABS market is not an originate to distribute risk-transfer market, but rather a critical channel for funding and liquidity. Issuer incentives are strongly aligned with investors due to their dependence on debt capital markets for funding.  Credit Card ABS provides over 50% of funding for card issuers (followed by deposits). New Credit Card ABS issuance is expected to grow in the wake of higher rates and funding costs from deposits.

In our March 2016 newsletter, we discussed credit card master trust performance, noting that delinquencies from 2011 through 2015 followed a downward trend for major credit card issuers.

We continue our analysis below, observing delinquencies continuing the downward trend in 2016, reaching historic lows in early 2016.

While the Composite index shows this trend, there is variability among the individual trusts. Discover and Capital One, with a mass-market tilt in customer base, experienced larger rises in delinquencies, compared to Amex and Chase which have a mass affluent footprint. 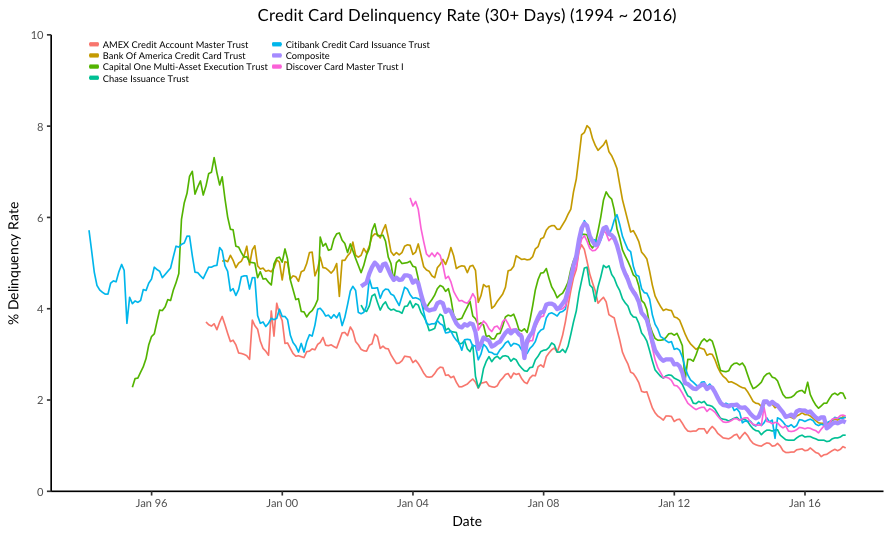 There are limitations in comparing delinquency rates on credit card ABS to installment loans. For instance, unlike MPL ABS deals which consist of static pools, credit card trusts are revolving securitizations that re-invest principal and interest over time. Also, we do not have access to the credit score distributions for credit card issuers to compare risk on an apples-to-apples basis.

Nevertheless, when comparing credit card ABS performance to the PeerIQ loan performance monitor we can draw some conclusions:

We can also offer the following tentative hypotheses which we look forward to testing with our TransUnion partnership:

We look forward to expanding on payment priority trends in subsequent newsletters and via the PeerIQ analytics platform.