On Thursday, President Trump announced his nomination of Jerome Powell to succeed Fed Chairwoman Janet Yellen as the next chairman of the central bank. While this is the first time in 40 years that a president has not asked the current Fed Chair to stay for another term, Powell’s behavior as a Fed Governor and support for the current Chairwoman indicates he would stay the course set by Janet Yellen. In his time as a Fed Governor, Powell has never cast a dissenting vote.

Also on Thursday, President Trump rolled out his new tax plan which reduces the number of tax brackets from seven to four and cuts the corporate tax rate to 20% from 35%. Relevant to marketplace lenders, the tax plan reduces the mortgage interest deduction cap by half. Borrowers can deduct interest payments on mortgage principal balances up to $500,000, down from $1 Mn currently. In reaction to the news, the homebuilder index traded down 2.5%. However, the stock price performance of constituents was divergent, affecting the high-end builders more, with TOL down 9.4% and LEN down 3.3% on the news.

Transunion published a study highlighting the growth in market share by FinTech lenders in the unsecured personal lending space. FinTech lenders accounted for 30% of all origination volume in 2016 and have contributed to expanding borrower access to unsecured credit. FinTech lenders have also generated better risk-adjusted performance on their portfolios than banks and credit unions.

SCLP 2017-6 is the largest deal on SoFi’s shelf, and the first since SCLP 2017-5, which priced concurrently with Mike Cagney’s resignation. As we discussed in our previous blog post, SCLP 2017-5 priced slightly wider on the news (10 to 15 bps). SoFi’s latest consumer lending deal, SCLP 2017-6, is the first deal from SoFi with borrowers living in FEMA declared disaster areas, comprising approximately 12% of the deal. We included some other highlights below: 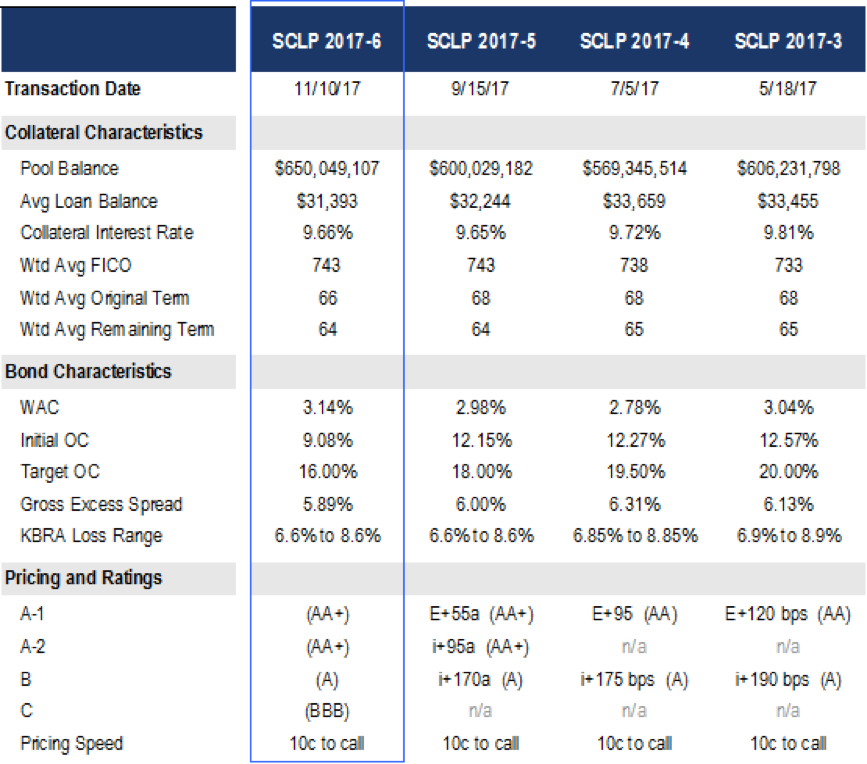 SCLP 2017-6 Structure
Continuing the trend of its last three deals, SCLP 2017-6 has a lower initial and target OC when compared to the prior deal on the shelf (as seen in the table above). Although it may seem that SoFi is structuring deals more aggressively, the A and B classes have higher initial CE when compared to SCLP 2017-5 by 2.38% and 0.76% respectively. As seen highlighted in blue on the chart below, SoFi accomplished this with the subordination of the C class, which when combined with the deal’s initial OC, provides more significant support for the A and B classes. The drop in excess spread is another consideration for classes A and B to require higher credit enhancements. 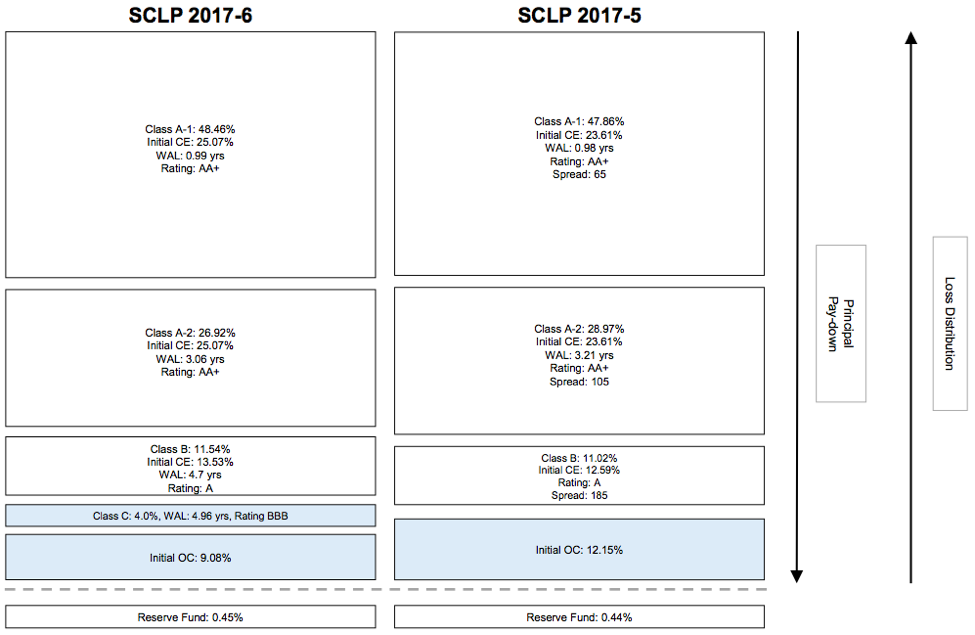 However, we continue to observe increased variation in deal structure and collateral quality. Overall these factors increase the need for investors to utilize 3rd party risk management services, such as those offered by PeerIQ, to improve investment decision making.