ABS East kicks off this Sunday in Miami. Stop our booth to be entered for an Oculus Rift giveaway and be sure to catch the panel with Ram this Monday at 2:50 PM for Trends in Online Consumer Lending: Less Tech, More Fin?

This week, Equifax continues to be at the top of everyone’s mind following the hack that may have compromised the names, Social Security numbers, birth dates, addresses, and driver’s license numbers of up to 143 million people. In the fallout of the Equifax breach, the leading credit bureaus are dealing with an overwhelming volume of credit freeze requests from consumers. While it is still too early to tell, it seems that the genie is out of the bottle. The breach is sparking additional focus on FinTech innovation to protect consumers (e.g., digital identity verification, disposable card numbers, etc.).

This Friday, Mike Cagney resigned as CEO of SoFi and the company became the latest Silicon Valley high-flier embroiled in controversy. This all happened very quickly. On Sunday, September 10th, the WSJ published an article alleging inappropriate behavior was commonplace at SoFi. The next day, Mike Cagney announced his plans to resign by year end. However, only days after his announcement, amidst a flood of media coverage, Cagney resigned as CEO and stepped down from the board.

Beyond the headlines, SoFi’s growth engine continues. In Q2 2017 alone, SoFi funded $3.1 Bn in loans with $134 Mn in revenue and $61.6 Mn in adjusted EBITDA. Revenue and adjusted EBITDA were up 67% and 60% year over year respectively.  The news of Cagney’s resignation coincided with SoFi marketing its latest personal loan deal which priced this Friday. Interest in SCLP 2017-5 was initially strong, however the bond priced somewhat wider than guidance. We analyze this further below.

On a more positive note, Goldman Sachs believes lending will be the biggest driver of net revenue growth in years to come. We are not surprised – last year, we made the business case that banks can boost ROE by originating or buying loans from non-banks. Harvey Schwartz of Goldman Sachs described lending as a $2 Bn annual revenue opportunity. Across Goldman’s three lending conduits, Marcus is expected to add $1 Bn in incremental revenue, while private wealth (GS Select) and corporate lending are expected to contribute $500 Mn each.

Consistent with their confidence in the lending business, Goldman Sachs agreed to buy $300 Mn of loans from Mosaic and snapped up employees from failed small business lender Bond Street. Mosaic, which makes loans to homeowners for solar energy systems, is the dominant solar FinTech firm and raised $220 Mn for Warburg Pincus last summer. This news is a major win for Mosaic. The GS deal will help other investors get comfortable with the asset class. The deal also improves Mosaic’s funding profile and more than doubles the volume of Mosaic’s forward flow agreements.

SoFi’s Latest Consumer Lending Deal: SCLP 2017-5
After Mike Cagney’s resignation on Friday, the lead underwriter re-launched SCLP 2017-5. Since guidance was released before the critical NY Times article on Tuesday, we have a close (but imperfect) control to study the consequences of management upheaval on deal execution.

ABS investors reacted negatively to the news; the bonds priced 10 to 15 bps wider than guidance on Monday. Also, although the deal was initially upsized due to strong interest, the deal was downsized back to original size in the relaunch. Nevertheless, SoFi has benefitted from continued spread tightening and the recent execution is a substantial improvement versus prior deals on the same shelf.

As you can see in the table below, on the one hand, SoFi continues to be one of the most consistent issuers with regards to consistency of collateral. On the other hand, the structures have been changing slightly, each of the last three securitizations has less over-collateralization than the prior. Additionally, SCLP 2017-5 broke the A class into A-1 and A-2. Both classes are senior and have the same amount of initial CE. Since A-1 and A-2 are sequential classes, the A-2 has a longer WAL, is riskier and priced wider. 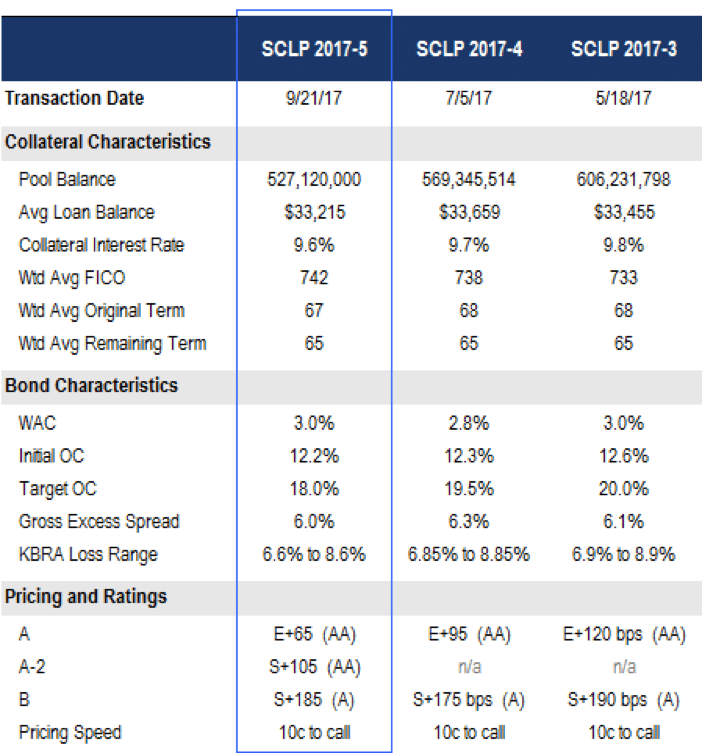 LendingClub’s Self-Sponsored Prime Consumer Deal: CLUB 2017-P1
LendingClub priced CLUB 2017-P1 this week, a three class deal with $363 Mn of prime loans outstanding. This is the second self-sponsored deal from LendingClub, and it follows the success of CLUB 2017-NP1. LendingClub expects to alternate between prime and near-prime securitizations at least once a year going forward. Of the $363 Mn outstanding, approximately $100 Mn came from LendingClub’s balance sheet (a shift from prior management’s business practice); the remaining loans were contributed from investors.

The CLUB 2017-NP1 and CLUB 2017-P1 deals total to approximately $628 Mn in loans, yet LendingClub has facilitated almost $29 Bn in loans on its platform as of Q2 2017 making it a small part of LendingClub by dollars loaned but a meaningful portion of EBITDA. As we discussed in a prior newsletter, their first securitization (CLUB 2017-NP1) netted the company $3.7 Mn and put them in the black for the quarter. 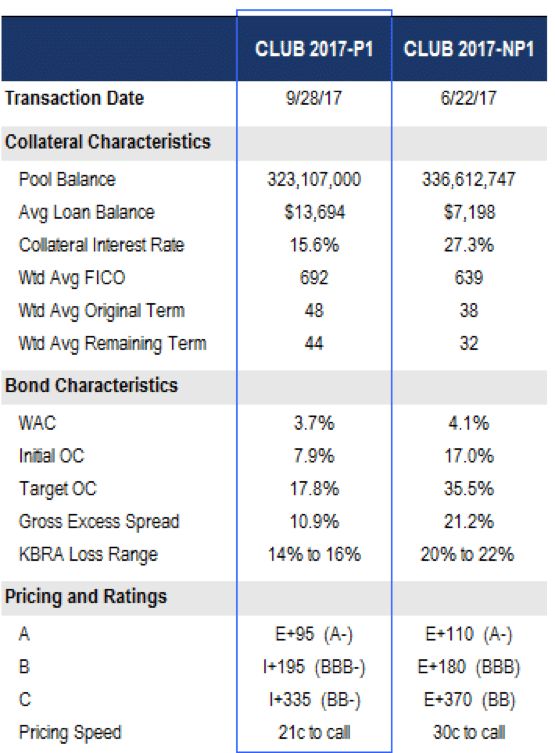