The US economy grew 3.2% in the third-quarter of 2017, a continuation of strong momentum from Q2 GDP growth of 3.1%. This strong GDP growth print comes just after Congress passed the tax reform bill this week.

In regulatory news, the new head of the OCC Joseph Otting said that he supports the creation of a banking charter for FinTech firms. Mr. Otting believes that technology companies are fulfilling a void left by conventional financial institutions in the lending space, especially to underserved individuals and businesses. Wepreviously analyzed the implications of granting technology firms bank charters and noted that the likely beneficiaries of the charter will be technology firms that can demonstrate, among other considerations, the ability to meet their liquidity needs, strong risk management, and safety and soundness standards. In a related development, a federal judge dismissed a suit filed by New York’s Superintendent for Financial Services against the OCC challenging the FinTech charter.

Upstart’s software-as-a-service lending platform launched this week with BankMobile using the platform to make personal and student loans. BankMobile will use the “Powered by Upstart” platform to make personal loans in 43 states ranging from $5,000 to $30,000 with interest rates starting at 5.99%. Upstart has combined data science, design, and automation to create this platform as the company looks to generate significant revenue from the SaaS model. BankMobile will also use this platform to make student loans to millennials who have thin credit files but have completed a four-year college degree program. BankMobile, like GS Marcus, is not charging origination fees and we expect other banks planning to launch lending businesses to follow a similar mode.

This week, we introduce our redesigned MPL Loan Performance Monitor where we track the delinquency rates, cumulative losses, and transition matrices on public marketplace lending data that is comprised of loans originated by LendingClub and Prosper. 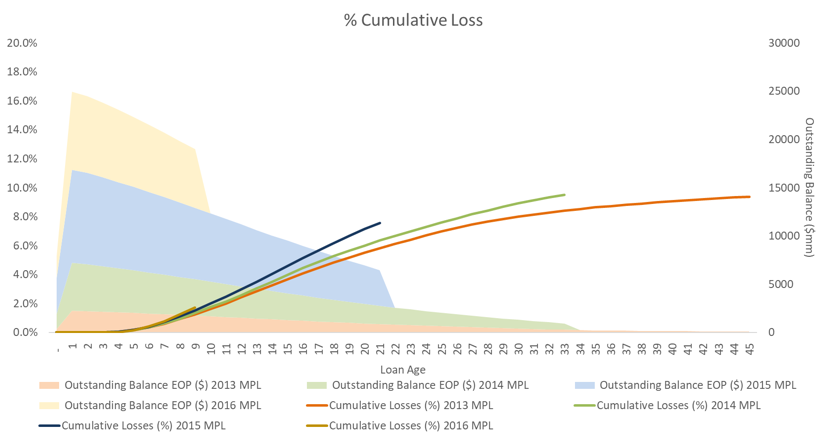 The chart above shows Cumulative Loss (%) on the public MPL dataset by annual vintage, in conjunction with the size of the pool for each vintage. Overall, we notice that delinquencies and cumulative losses on newer vintages are higher than those seen on older vintages at the corresponding loan age. The transition matrix shows that a large portion of loans have stayed current, but once a loan misses two payments, its propensity to miss further payments and eventually charge off is high. PeerIQ customers can reach out to their Client Delivery lead to generate similar charts.

With that, we wish you a joyous and safe holiday season!