Is FinTech Getting Overcrowded? Square, Klarna, and Walmart Ramp Up Banking Capabilities

This week, we look at US GDP’s strong recovery, TransUnion’s LendIt webinar takeaways, and the continued focus on banking services by Square, Klarna, and Walmart.

The US economy has roared back to life, with the Fed estimating that the GDP growth could hit 10% for the quarter. “With strong federal fiscal support and continued progress on vaccination, GDP growth this year could be the strongest we’ve seen in decades,” said NY Fed President John Williams.

Fed Chairman Jerome Powell said that inflation is likely to rise as the economy recovers, but he believes it will be temporary. A selloff in equities still ensued as benchmark 10-year Treasury yields jumped another 7 basis points to 1.55%, the highest since mid-February of last year.

Although the Fed is unlikely to raise rates, it can implement some policy tweaks to address the recent turmoil in bond markets.

LendIt hosted a webinar with Transunion on “Risk Strategy Considerations for a Post-COVID-19 Environment”. Key takeaways were: 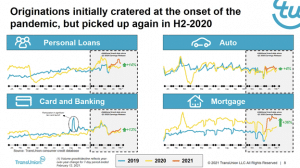 Square, Inc. has announced the launch of its Utah based industrial bank, Square Financial Services. Now that it is FDIC approved, the company will start underwriting and originating business loans for Square Capital’s existing lending product.

Note that Square Financial Services will continue to sell loans to third-party investors and limit balance sheet exposure. In their press release, Square stated, “we do not expect the bank to have a material impact on Square’s consolidated balance sheet, total net revenue, gross profit, or Adjusted EBITDA in 2021.”

With the new funding, Klarna wants to build a stronger financial relationship with its customers by ultimately becoming a challenger bank. It has a range of licensed banking products, such as  savings and current accounts in Sweden and Germany, with more countries to follow.

In BNPL, Klarna is active in more than 17 countries and has over 250,000 retail partners, including Macys, H&M, Ikea, Expedia Group, Samsung, ASOS, Peloton, Abercrombie & Fitch, Nike, and AliExpress.

In the US, Klarna’s main competitor Affirm currently has a market cap of $18.7 Bn.

Walmart’s fintech startup has attracted some of Goldman’s key talent. The head of Goldman’s Marcus unit, Omer Ismail, has decided to leave the bank to join Walmart’s new fintech venture. He is a 20-year veteran with Goldman and was one of the executives that developed its strategy for digital banking offerings back in 2014.

Joining him at Walmart is David Stark, who helped land and build Goldman’s credit-card offerings with Apple and General Motors.

Walmart said in January that it was creating a majority-owned fintech subsidiary in a partnership with venture-capital firm Ribbit Capital. See our initial coverage here.