During an unusual period of global synchronized growth, the IMF raised its Global Growth Forecast for 2017 and 2018 by 10 bps to 3.6% and 3.7%, respectively. The IMF also named nine banks that will struggle to achieve profitability. “About a third of banks by assets may struggle to achieve sustainable profitability, underscoring ongoing challenges and medium-term vulnerabilities,” the IMF said in its Global Financial Stability Report published Wednesday. As seen in the chart below, the IMF is referring to any bank with a 2019 return-on-equity forecast below 8%.The Institute of International Finance published a study showing that since 2010 banks across the US, Japan, and EU are, on average, earning less than their cost of capital.

Since the post-crisis capital and liquidity rules, we continue to see a shift of origination and funding of loans from the banking sector to the non-bank sector. We recommend Lalita Clozel’s article “Could Online Lending Become the Next Systemic Risk?” in American Banker to learn more.

Last weekend, The Wall Street Journal reported Fortress Investment Group is looking to sell OneMain Financial. Although it is publicly traded, OneMain is 55% owned by Fortress. Fortress, currently in talks to be acquired by SoftBank, recently completed the sale of Logan Circle to MetLife. We performed an in depth analysis of OneMain’s most recent near-prime deal in early September.

In securitization news, Marlette Funding Trust 2017-3 is expected to close at the end of October with $298 Mn in loans. MFT 2017-3 is the fifth ABS from this platform and the fourth on the MFT shelf (the first was on Citi’s CHAI shelf). Marlette typically lends ~$400 Mn per quarter and currently has nearly $100 Mn loans on its balance sheet.

In other securitization news, SoFi priced SOFI 2017-E last week. With a $777 Mn deal size, it’s SoFi’s largest student loan deal to date. Consistent with the last four deals on the shelf, SoFi accumulated approximately $10 Mn in loans per day. Additionally, this deal had a weighted-average seasoning of two months; the prior four deals on the shelf had seasoning of one or zero months at issuance. Also, the time since the previous deal was longer than typical indicating SoFi may be focused on stabilizing rather than ramping up lending. SoFi is pulling its application to open a new bank chartered in Utah following the spate of recent executive departures.

In case you missed it, PeerIQ released its quarterly securitization tracker last week for Q3 2017. You can access the full report here.

In this week’s newsletter, PeerIQ dives into the earnings and loan loss provisions for the major money center banks.

The big money center banks released earnings this week to a mixed reception although YTD stock performance is strong. FICC trading revenues were down year-over-year across the board. ROE levels for the big banks remain mired in the low double-digit area or lower. 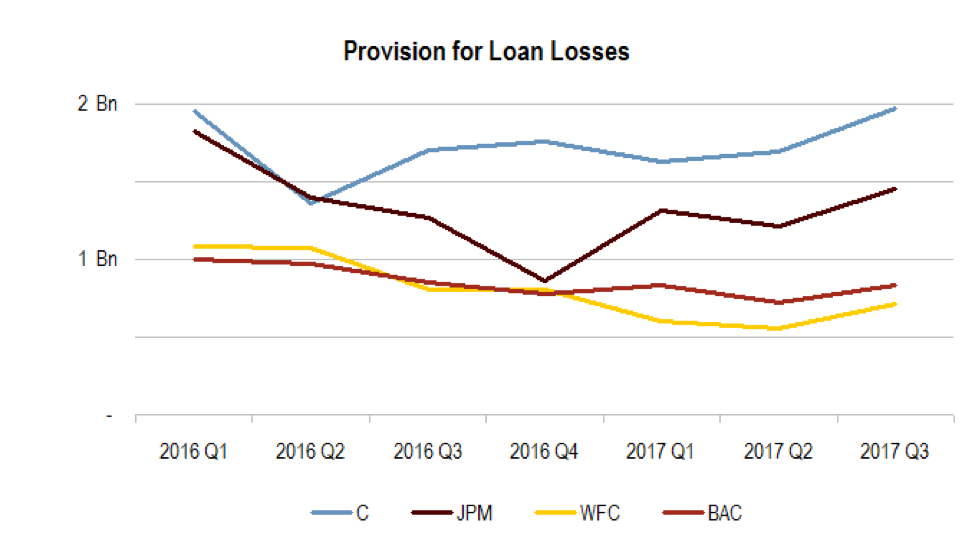 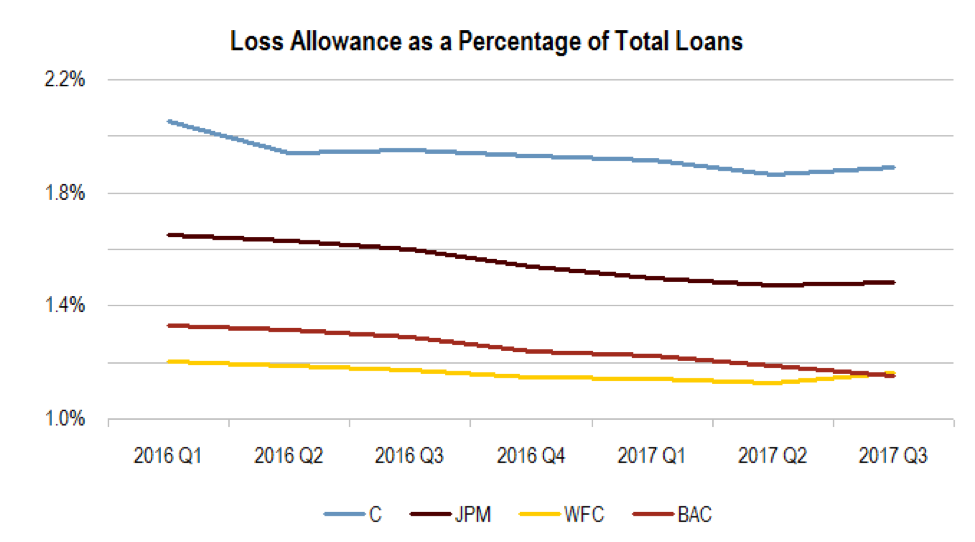 As earnings season continues, we look forward to reports from investment banks in the coming weeks. GS appears intent on bucking the pressures to ROE. Continuing the trend of consolidation in the lending industry, Goldman Sachs purchased Genesis Capital from Oaktree Capital Management. Genesis offers loans to developers and fix-and-flip home buyers. In a prior newsletter, PeerIQ details how Goldman has made a strong push into lending recently and expects lending to be the most significant driver of revenue growth (and ROE) in the coming years.

American Express is also making moves to take on processors Square and PayPal in Small Business lending. Like its FinTech rivals, Amex is utilizing the data generated from its credit card operations. Amex plans to offer short-term loans ranging from $3,000 to $50,000 over a 1, 2, or 3-year payment plan.