Earlier this week, Mosaic priced MSAIC 2017-2, their second solar ABS. The deal was heavily oversubscribed, with over $1.7 Bn in orders for a $307.5 Mn deal. PeerIQ teamed up with Mosaic by powering the marketing process with the PeerIQ investor portal. The investor portal provides greater transparency to help investors transact with confidence by offering transparent loan-level analytics. We are pleased to report that the Mosaic deal achieved record tight execution levels and the deal was heavily oversubscribed.

On Thursday, Nelnet announced it would acquire Great Lakes Education Loan Services for $150 Mn in cash. The news comes only two weeks after Navient announced its acquisition of Earnest.  The acquisition will more than double Nelnet’s servicing business and allow the two companies to leverage the best tech and personnel from each organization to provide superior customer experiences. Nelnet (NYSE:NNI) rallied over 10% on the announcement and continued the rally to close up 16% for the week.

Days before reporting earnings, PayPal rolled out Venmo payments to US retailers allowing Venmo app users to use their Venmo balances to make in-store purchases. The company also announced a partnership with Facebook that will allow users to send and request money from Facebook friends. The company has almost doubled in value since it spun off from eBay two years ago and has since surpassed the market value of American Express.

In other securitization news this week Avant filed ABS 15-G for is AVNT 2017-B deal. KBRA assigned preliminary ratings to three classes of notes issued by Avant Loans Funding Trust 2017-B (“AVNT 2017-B”). The transaction is a $232.648 Mn consumer loan ABS transaction that is expected to close on October 31, 2017. We took a close look at Avant’s first deal of 2017 in a prior newsletter.

This week was also busy for early stage FinTech companies. Finova Financial, a socially responsible lender that provides loans based on the equity in your car, raised $102.5 Mn in equity and credit funding, led by CoVenture. LendingHome, a California based mortgage lender, raised $57 Mn in equity financing from Sberbank and Noah Holdings unlimited. The announcement was concurrent with the closing of its $100 Mn Credit Opportunities fund as well as a $300 Mn credit facility. Lastly, J.P. Morgan agreed to buy WePay, a cloud platform that provides payment processing through its APIs.

Mosaic Background
Mosaic, led by CEO Billy Parish, provides financing for residential solar systems in the United States. With over $1.1 Bn loans funded, Mosaic maintains a proprietary origination channel consisting of a high-quality network of approved solar installers. These installers are carefully screened as Mosaic must rely on these partners to refer quality borrowers because the loans are secured by the installed solar systems.

Mosaic, whose Capital Markets team is led by Managing Director Katya Baron, is on a roll. Last month, Mosaic inked a deal with Goldman Sachs for a $300 Mn forward purchase agreement. As we discussed at the time, the move more than doubled their forward flow agreement volume and provided Goldman’s stamp of approval. In addition to the ~$450 Mn the company has raised through securitizations, other significant sources of financing include a $220 Mn series C equity raise led by Warburg Pincus in 2016 and $650 Mn in warehouse commitments from a diverse mix of banks.

Borrowers are expected to use their federal tax credit to prepay 30% of their loan within 18 months. If they do not, the loan is re-amortized, and the monthly payment increases. Although Mosaic expects payment in 18 months, the federal tax credit can be deducted over two years following installation, in the case that a borrower does not have enough annual taxes to deduct. 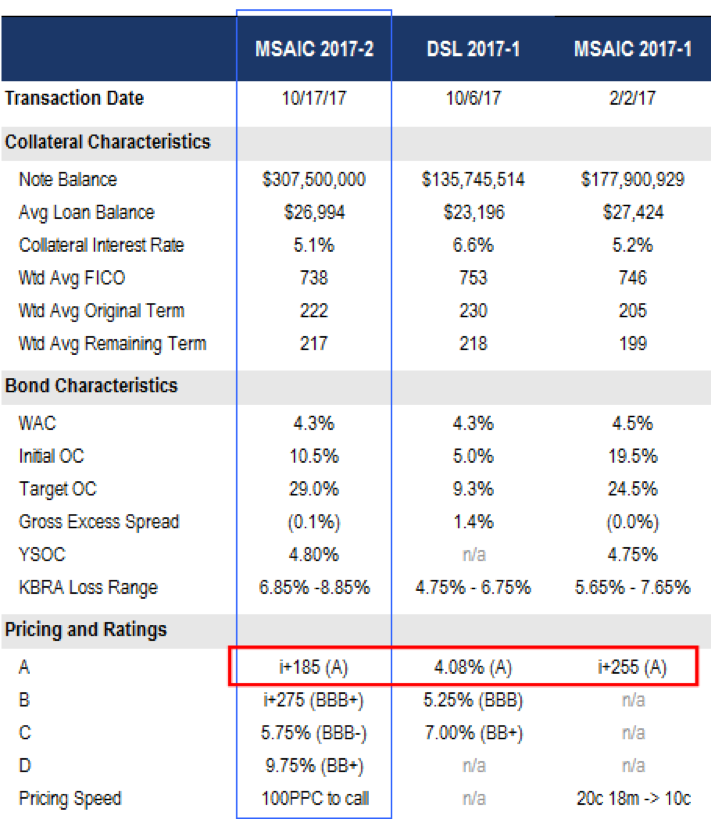 As we mentioned earlier, the market received the deal extremely well. As the second deal from Mosaic, MSAIC 2017-2 has a more complicated structure with multiple support classes including a principal only (PO) class.

CNL Triggers
Mosaic has used the same cumulative net loss trigger in both of its securitizations. As compared to DSL 2017-1, MSAIC deals have a tighter trigger provision earlier in the deal, but allow for more cushion at the end, starting at month 25. 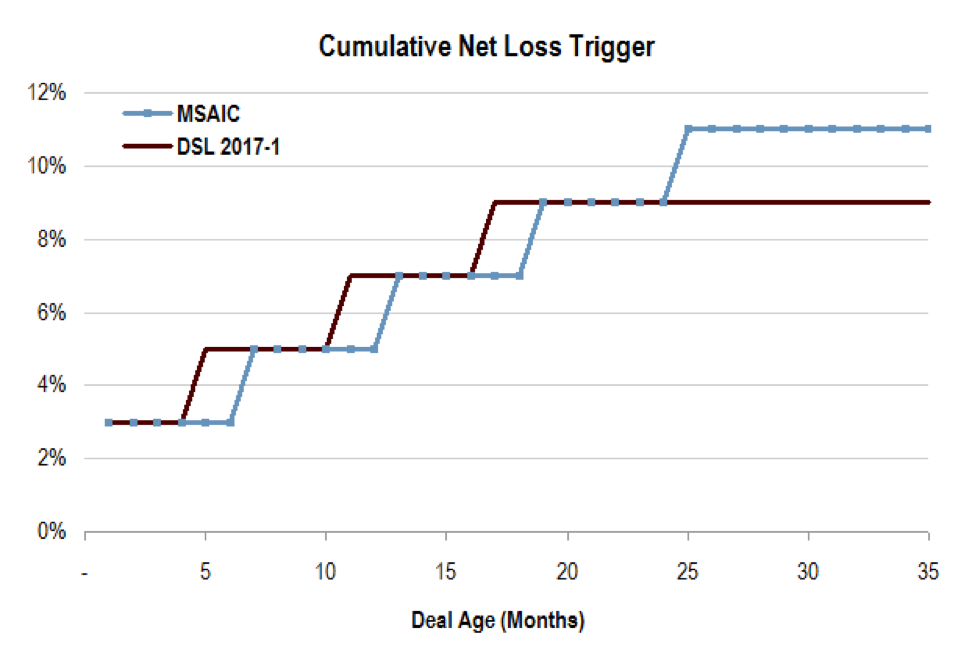 Although the structures of the three solar deals this year were entirely different, the exhibit conveys that ABS deals in the solar space have taken similar approaches to default triggers. In our prior newsletter, we explored trigger definitions and highlighted the implications of a trigger breach from an investment perspective.

The pricing of MSAIC 2017-2, coupled with the PO class shows the healthy appetite for solar collateral amidst a global search for yield.

We are proud to work closely with Mosaic on their offering, and continue to believe that robust 3rd party data and analytics offerings and independent credit models, such as those offered by PeerIQ, will help both lenders and investors transact with confidence.